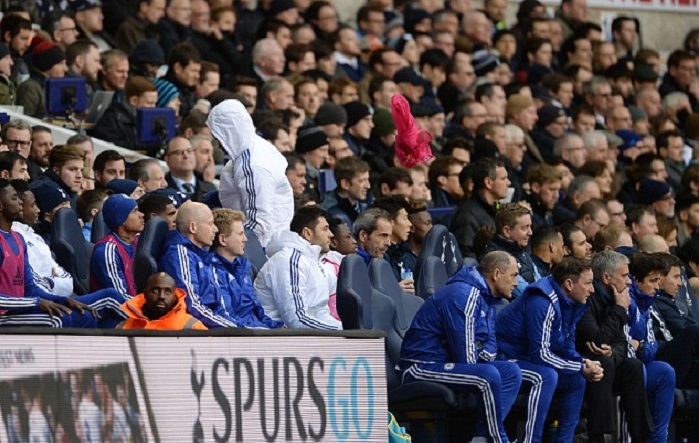 It was a petulant gesture, rather than a statement of war, but Diego Costa’s childish ‘tossing of the bib’ in Chelsea’s 0-0 stalemate with Spurs on Sunday is testament to how far the mighty striker has fallen.

The Spaniard had been dropped to the bench by Jose Mourinho after a fallow period in front of goal, with Eden Hazard preferred up front in a false nine role.

And after being asked to warm up by Mourinho during the second half of the clash, Costa was a little miffed when Ruben Loftus-Cheek was brought on instead of him and reacted angrily by throwing his bright orange bib over his shoulder and in the general direction of Mourinho.

At this point of the season in 2014/15 Costa had already netted eleven times during Chelsea’s blistering start to the campaign, however this time around the 27-year-old has found the net just four times – three in the Premier League – as the Blues’ poor start to the term continues.

Relations between Costa and Mourinho appeared to sour during Chelsea’s 4-0 win over Maccabi Tel-Aviv in the Champions League last week, although the manager suggested in a subsequent press conference that the pair had healed their rift with ‘kisses and cuddles’.

But Mourinho is no stranger to making big and often bold decisions as far as his team selection is concerned, and at times this season one or more of John Terry, Gary Cahill, Branislav Ivanovic, Cesc Fabregas, Nemanja Matic and Hazard have all been subjected to a period in the dugout. The Belgian has subsequently come back into the team and delivered a couple of fantastic performances, so no doubt this was Mourinho’s intention with Costa.

“For me his behaviour is normal. A top player on the bench will not be happy,” Mourinho said when asked about Costa’s act of petulance. “If he wants to hurt me it would not be with a bib. I have a good relationship with him.”

“Diego is privileged to have been kept in the team for all these matches and today we thought our best strategy was to play with this. I am happy with my decision and the players.”

What this all means for the Spanish international’s future at the club is unknown. The transfer window opens in a matter of weeks, and with Mourinho likely to dispose of some of his under-performing stars to make way for an injection of new blood, now might be a wise time for Cost to get his head down, toe the line and score some goals.